skip to main | skip to sidebar

Kids say the darn dest things sometimes....makes me wanna hold up my " here's your sign" sign. So, the other day I promised Presley I would put some pink and purple streaks in her hair. She wanted me to do it too, so we did. My hair is too dark to have it show up much, but her's looked fantastic, and she loved it, which is what counts. Well, that night we were sitting around reading books and Presley was standing behind me looking through my hair trying to find the colors. She says,

The rest of the family laughs. 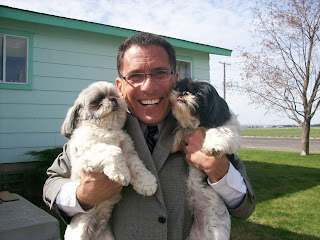 Well, I have been waiting and waiting hoping I would not have to Post about this...at least not this way. But I have come to terms, finally, that Squeegie is not coming home. Squeegie has been a part of our family for nine years. We bought her when she was just a baby and have raised her ever since. I was hoping that when I had to post about this it would be because she had gotten old and passed away. The old part she was, but she ran away. So much harder to deal with I think. Death is something we have to accept, it will happen to everyone at some point in time, but running away...who does that? I feel awful. W e actually thought we found her once, someone picked up a dog looked just like her. I went to see, but it was not her. Then we scoured the shelter. I sent Brandon in cause the kids wanted to see the other animals, and i was feeding the baby. He came out a bit later and said I had to go in because there was a dog in there and he honestly couldn't tell if it was her or not. I thought aww crap, I'm gonna come unglued in the shelter. So I went in, walked passed all the kennels with sad eyes until the very end where this dog was. It took me a while, I had to do some searching, but in the end I determined it was not her. She had been missing for a month and her hair would have been long and probably dirty, but this dog didn't make the annoying, but cute little squeal our Squeegie always made when she wanted ur attention. And then I had to walk away in tears. People probably thought I was a nut.

I still have a hard time thinking she is dead. We live in the open wide country. We drove up and down the frontage roads, the freeway, the canals..everywhere. I was hoping to find her, even if it was that she got hit, at least that would be closure for me, but we found nothing. Come dark we drove around with a big spotlight calling her name....nothing. Squeegie was a very smart dog. If she heard us calling, she would have come. 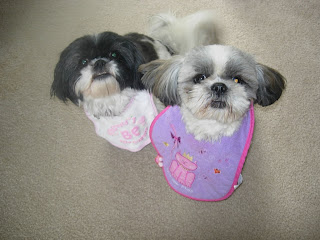 She has been gone for 8 weeks now. I'm thinking someone saw her running up the road and thought she didn't belong to anyone out in the country, not exactly a country dog. I'm thinking someone picked her up thinking she was dumped off. I'm thinking someone has her. I have searched the country, the newspaper, and the shelter many times. When do I stop? I keep thinking she is gonna turn up. The most awful thing is Gus, her companion, is distraught. He sulks, pouts, sleeps, won't eat, and still constantly sits by the door..waiting. And when he goes outside, he sits on the lawn and stares out the direction she ran. Poor thing. All the extra treats in the world haven't helped him snap out of it. So, for my emotional sake I'm going to try to convince myself she went for greener pastures to pass from this life....ya know there is a movie like that, the dog goes to a nice quiet, pritty place to die. Perhaps there was just so much commotion going on here. I'd want to die in peace too.

She was a great dog. The most obedient dog I have ever owned. She has been on plenty of journey's with us. over a dozen moves, three more kids added to the family, and lots of love. She earned her spot in the family that's for sure. We miss her. We love her. And we will always have a special place for her. 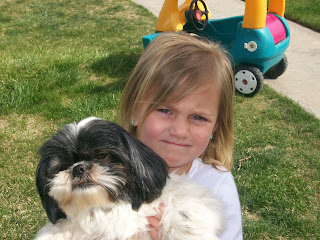 I have never been called the crafty kind, but I love doing them! I have a lot I have started, and a lot I have yet to finish, but here are a few I've worked on over the last several months. The kids loved helping with this one...and it was a perfect "kid" job too! 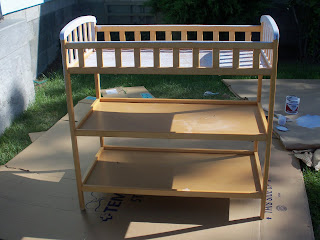 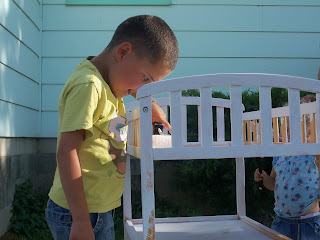 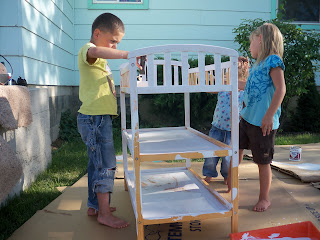 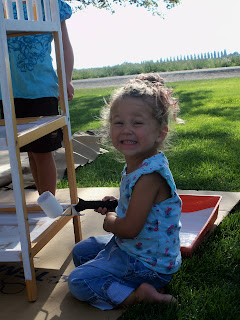 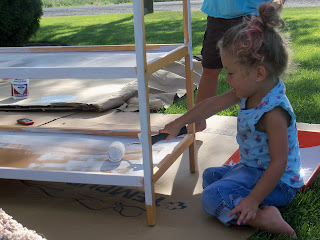 Here is the end result! A great find at a thrift store, some paint, and baskets at Burlington. 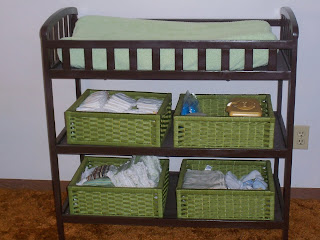 We did the crib too! Now if only I could paint my white walls... 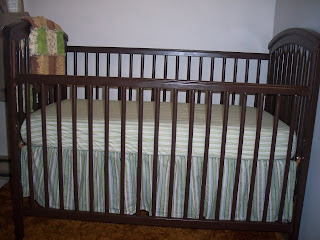 My sister introduced me to a fabulous wood shop in Sandy, Utah. Tons and Tons of way cute stuff! So far I have done a Summer sign, and a Witch sign. It was way fun painting and decorating...and not so much fun sanding. :) I have two more signs too do. Better put my sanding face on. 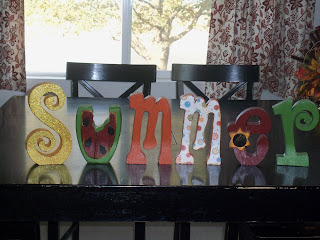 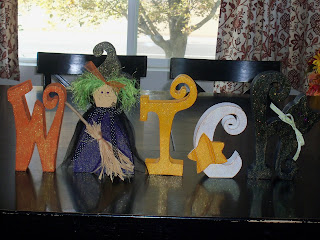 I have also been doing burp rags. have done a few different styles, but these ones were my favorite! so soft. And this is my homemade valance. The picture is horrible and totally doesn't do it justice, so if u wanna make em, drop by and get a better look! It was fun, and super fast! 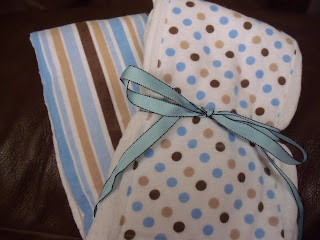 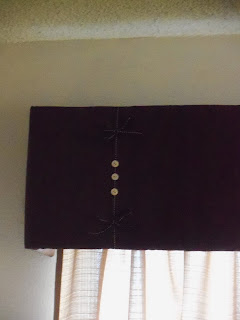 I have a few quilts I've started and stopped and I made a tu-tu for my neice, that was fun. I love getting on craft kicks, i feel like I just can't stop! Happy Crafting!
Posted by jenica heslop at 9:46 AM 2 comments: 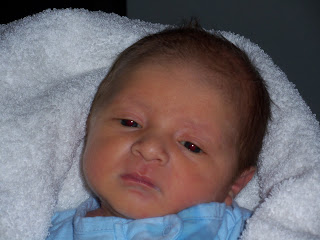 We spent a couple of weeks on vacation this summer. All of my sisters were able to come into town for a week, and it's the first time in several years we have all been able to see each other, apart from two days for my sisters wedding. We took a day and rode up to Bear Lake, which as a child was a yearly tradition for my family. There was hardly any beach this year, but the water and the wave runners worked just the same :)

Here is Grandpa taking Presley and Kylee for a strole in the water. 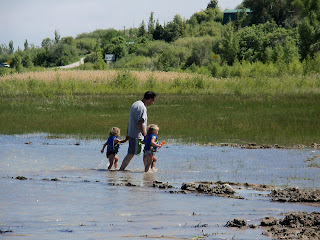 This is Presley and Kylee, both three...both trouble makers...but cute ones. 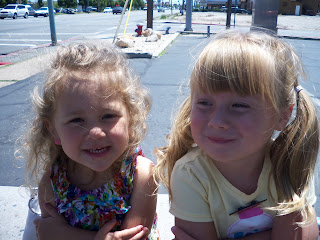 Uncle James seems to be the clone for Conner. They look so much a like. Conner just loves hanging out with the big boys. 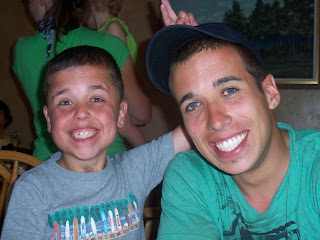 This is Conner's cousin Hunter. 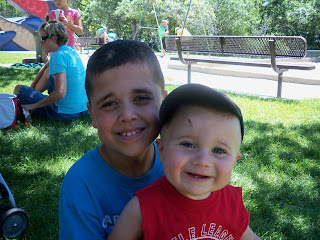 He was so cute. He would only sit on Conner's lap if he got tickled. We went to the Dinasour park, very much different from when I went years ago. Kids all had fun. 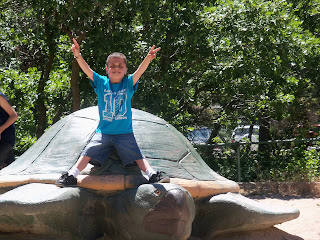 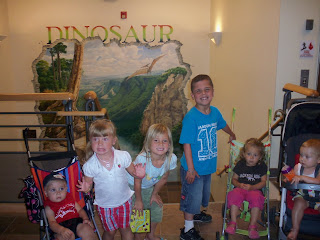 Well, there's not much to say. So I'm just going to pretend my last post was not six months ago, and go on blogging like all the other faithful bloggers do. :) It has been an Extremely busy summer. So much has been done, so much happened, and so much to tell. So hopefully now that I have regained my rightful access to my blog I can start posting like crazy to get caught up! First off, we have Taylor and her cute cheerleading adventure. 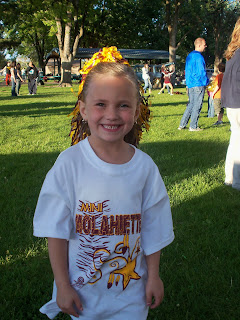 She pulled out my cheer stuff from way back when and all it took was one look at a pom pom and she was hooked. She really enjoyed doing the mini molahiettes, and it was a good experience for her. 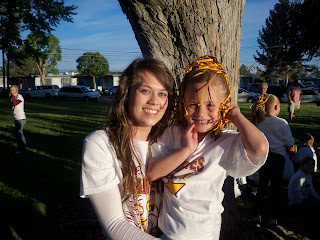 The parade was super long, and ended in the dark, but she was a trooper all the way, even when her mother forgot to bring her jacket and also failed to think about putting a long sleeve shirt on her. Taylor was so cute. She just marched and danced and smiled. 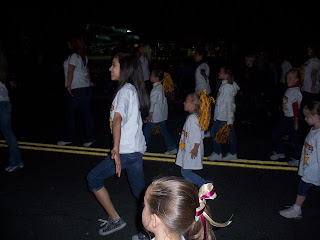 And when it was all over, we got in the car, and turned around to ask her questions and she was out cold. Diva and all. 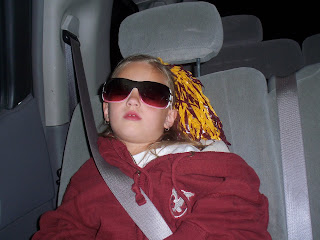 We also had some birthdays! Taylor turned six and six days later Presley turned three. We had a quick party for taylor before we left outta town, parties are sure a lot of work, and poor presley had her big day in the car on the start of our trip. She did get cupcakes eleven hours later upon arriving at Grandma's house, so I think all in all everything worked out. 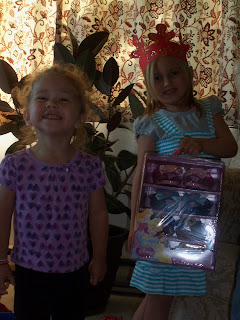 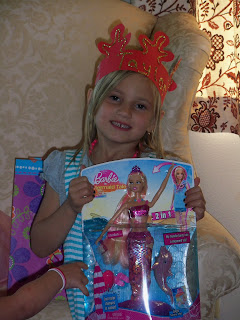 This photo is just plain self explanatory...kids are just cute. 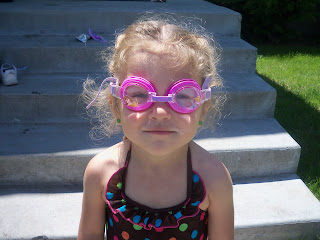 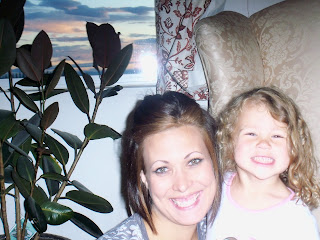 There is a frog in my house...in my kitchen...and I cannot find it.
Every time I set my purse in its spot on the counter I hear it croak...
Do you think it might be in my purse????
Why would a frog be in any one's purse?
I take that back....a FAMILY of frogs could live in plenty in the bottom of my purse, and never starve I'm sure.
Posted by jenica heslop at 6:55 PM 3 comments:

jenica heslop
MOSES LAKE, WASHINGTON, United States
I AM A PROUD, TIRED, MOTHER OF FOUR! I HAVE A WONDERFUL HUSBAND, BRANDON, AND FOUR BEAUTIFUL CHILDREN. I LIKE TO LEARN NEW CRAFTS, GARDEN, EXERCISE,PLAY WITH MY KIDS, SEW, EVEN THOUGH I'M NOT THAT GOOD, AND WHENEVER TIME PERMITS, I LIKE TO READ. I PREFER THE HOT WEATHER, BUT I THINK THE SNOW IS JUST BEAUTIFUL, ESPECIALLY AT NIGHT WHEN THE MOON COMES OUT AND THE TREES ARE COVERED IN WHITE DUST. I ENJOY TALKING WITH FRIENDS, AND I LOVE TO MAKE PEOPLE SMILE. MY FAMILY IS MY INSPIRATION IN LIFE, AND I LOVE THEM.